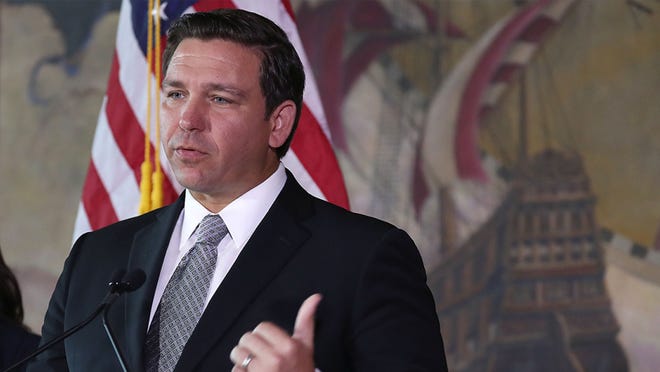 DeSantis’ latest target is one that has emerged as a favorite of conservative media: The Biden administration’s effort to combat disinformation, which the governor cast Friday as an attempt to “put out false narratives without people being able to speak out and fight back.”

“They want to be able to say things like Russia collusion and perpetuate hoaxes, and have people like us be silenced,” DeSantis said in a 10-minute riff before a crowd of town and county officials from Levy, Marion and Lake counties.

DeSantis v. Disney: What next?:DeSantis vs. Disney: Five ways the only-in-Florida political drama could play out

While local leaders awaited DeSantis’ ceremonial handing off of state dollars for community projects and workforce development, the governor kept his focus on the White House.

The Department of Homeland Security’s planned Disinformation Governing Board is seen as being created to help protect domestic and election security.

But DeSantis portrayed the initiative in a dark light, just hours after he touched on a range of topics popular with conservatives during an hour-long “town hall” broadcast by Fox News Channel and hosted by the network’ Laura Ingraham before a live audience in Orlando.

Even as policy and legal questions swirl around DeSantis’ recent strike at Walt Disney Co., prompted by the company’s opposition to Florida’s parental rights law, which critics branded “Don’t Say Gay,” the governor Friday said he is a defender of free speech.

“They want to stifle dissent,” DeSantis said, calling the Biden White House a “regime.” “I can feel, though, the public is sick of this. And you also see this with Elon Musk, purchasing Twitter. They wanted to use Twitter to enforce the narrative.”

Without specifically identifying his target, he warned how “they” want to censor people.

But even on Fox News Thursday night, DeSantis was forced to expand on having just driven what was seen as retaliatory legislation through a special session of the Florida Legislature aimed at dissolving Disney’s self-governing status in the state.

While questions abound about what would happen to roughly $1 billion in debt Disney’s Reedy Creek Improvement District holds, if it is, indeed, disbanded next year under the new law signed by the governor, DeSantis assured that he would be providing more guidance soon.

He also insists that somehow, Disney will pay its debts and state taxes.

“Disney will for the first time, actually live under the same laws as everybody else in Florida. Imagine that,” DeSantis told Fox’s Ingraham.

The bond rating agency Fitch Rating, though, issued a new advisory Thursday that warns the Disney-DeSantis clash could have a profound impact on the borrowing ability of all Florida governments.

The idea that the state can so easily reach in and change the legal status of another government “heightens bondholder uncertainty,” Fitch warned, adding, it “could alter our view of Florida’s commitment to preserve bondholder rights and weaken our view of the operating environment for Florida governments.”

DeSantis, who is seeking re-election in November and is widely viewed as a potential 2024 Republican presidential candidate, went Wednesday to Las Vegas to campaign for Republican U.S. Senate candidate Adam Laxalt, with whom he roomed while in Navy officer training.

It was DeSantis’ first out-of-state appearance as a campaign headliner for a fellow Republican. DeSantis “spent roughly 20 minutes praising his tenure and achievements in Florida before touting Laxalt’s bid,” according to the Nevada Independent.

But in Florida on Friday, DeSantis was sharing the stage outside a restaurant in the town of Williston, population 2,800, with officials from surrounding small towns and rural counties. Still, his message seemed aimed far beyond his surroundings.

“There’s a lot of momentum now behind having free speech,” DeSantis said. “So that people can speak the truth, particularly speaking the truth to a very decaying and discredited ruling elite in this country.”

While another special session is scheduled for May on the state’s troubled property insurance market, DeSantis echoed his support Friday for lawmakers someday approving an open carry law for firearms in Florida.

But he didn’t immediately say he’d add it to the session’s agenda, like he did with the Disney attack, which was hastily added and approved during the recent special session on congressional redistricting.

“I can tell you, the Legislature will get it done. I can’t tell you if it’s going to be next week, six months, but I can tell you before I am done as governor, we will have a signature on that bill,” DeSantis said.

John Kennedy is a reporter in the USA TODAY Network’s Florida Capital Bureau. He can be reached at jkennedy2@gannett.com, or on Twitter at @JKennedyReport