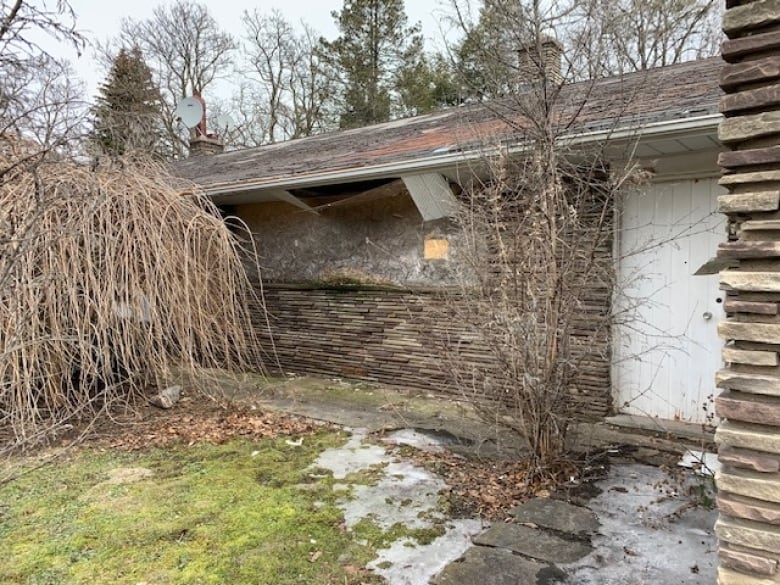 
Residents in one of Canada’s toniest neighbourhoods say they’re fed up with a crumbling, abandoned house that last sold for more than $7 million but which has become a derelict eyesore.

They want the City of Toronto to either clean up the single-storey, ravine lot property, fence it off or tear it down.

“We suspect there are people living in there, possibly animals, and we’ve been very concerned,” Jaffar Husain, the head of the local Glenorchy Residents Association, said.

“Some of the neighbours have been concerned that it’s a fire hazard. It’s very frustrating.”

The ranch-style home is on Salonica Road, which is just off The Bridle Path, in the area of Lawrence Avenue East and Bayview Avenue. That neighbourhood is one of the priciest in Canada, with mansions selling for more than $25 million, according to current real estate listings.

On Salonica, houses run between $5 million and $10 million, according to the area’s city councillor, Jaye Robinson.

She said there’s little the city can do to force the homeowner to fix up the property permanently.

“Our office is very familiar with this file,” she said.

“We have little teeth as a city to deal with these issues. We can ask them to comply. We can issue orders, but … we need more power so that they have to either rip the house down, which would make for a safer condition, or put the place back together.”

Robinson said she plans to work with staff to come up with a bylaw that would allow the city to do just that. But she said such “heavy-handed” new rules would likely require the province’s approval.

According to city staff, the property has been the subject of six property standards complaints since 2017. Those complaints range from the house being left unsecured, to holes in the roof, broken fences, graffiti and garbage left on the property.

All of those problems were addressed by the owner, city staff say, and there are no outstanding orders as of this week.

City staff won’t say who those orders were sent to. According to real estate records, the property was sold in the spring of 2018 for $7.15 million to an individual named Xin Zhang. In 2020, it was put back on the market for an asking price of $6.3 million but was de-listed months later.

Neighbours say the problems began several years ago, when they say the last person known to have occupied the house moved out.

The fact that it’s a ravine lot could be a deterrent for potential buyers, Husain said. The ravine edge could limit the size of the lot, which may make it less attractive to buyers.

“The footprint has to be very small because of the trees,” he said.

Victoria Vidal-Ribas, who routinely walks her dogs in the neighbourhood, said it’s puzzling that a house in such a desirable area could have been left vacant for so long.

“It would have had to have been a tear-down as opposed to a renovation, so I imagine that cost is is a factor as well,” she said.

Husain said a move-in ready house up the street from the Salonica property recently sold for about that amount.

“Why pay [$6 million] for a tear-down when you can have move-in ready for the same price?’ he said.

Robinson said she plans on consulting city staff with an eye to introducing a motion that would ask the province to give the city the ability to insist that owners of vacant properties either make them habitable or tear them down.