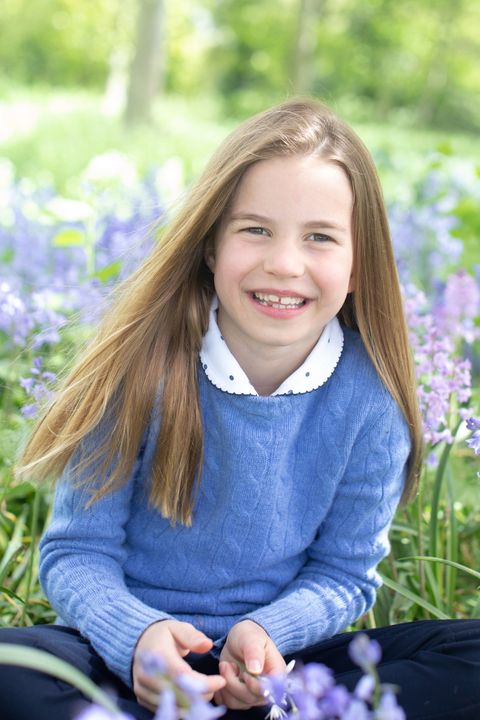 
Princess Charlotte has a special guest in her seventh birthday portraits.

On Sunday night, Kensington Palace released three new birthday photos of the young royal ahead of her seventh birthday on Monday. In the photos, taken by Duchess Kate this past weekend, Charlotte poses in a field of bluebell flowers while wearing a soft-blue sweater layered over a white collared shirt and navy pants. One pic, seen above, includes an appearance from the Cambridge family’s pet cocker spaniel, Orla.

Per a release from Kensington Palace, the Duchess of Cambridge snapped the photos this weekend in Norfolk.

The Cambridges adopted the three-year-old spaniel Orla from Duchess Kate’s younger brother James Middleton in November 2020, following the death of their beloved dog Lupo, per People.

This is the third year that the Cambridges celebrated Charlotte’s birthday in Norfolk, with Prince William, Duchess Kate, and her siblings—Prince George, 7, and Prince Louis, 3—celebrating the princess’s fifth and sixth birthday weekends at the Cambridge family’s country home, Anmer Hall, located on Queen Elizabeth II’s Sandringham Estate.

The Duke and Duchess of Cambridge have shared sweet stories of their family’s home life over the years, with sources expressing that the couple want as normal an upbringing as possible for their kids. On a January visit to the reopening of BAFTA’s renovated headquarters in central London, Prince William shared that the children have recently gotten into video games.

“They do definitely like gaming, they’re fascinated by that. George particularly, he’s more interested in it. The other two are a bit too small, but they love the films,” he said. “At the moment, it’s trying to regulate the gaming … monitoring screen time. Got to be careful of that.”

This content is created and maintained by a third party, and imported onto this page to help users provide their email addresses. You may be able to find more information about this and similar content at piano.io

Tropical depression likely in Caribbean. Tropical wave in Gulf could hit US coast